Still No To Bangladeshi Workers 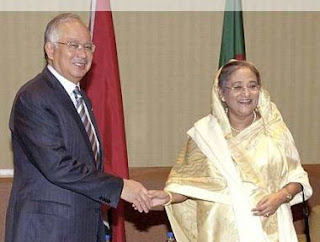 Still no to Bangladeshi workers

Cordial meeting: Najib meeting Bangladeshi Prime Minister Sheikh Hasina on the sidelines of CHOGM in Port of Spain on Saturday.

PORT OF SPAIN (Trinidad and Tobago): The freeze on the intake of Bangladeshi workers will stay despite a request from their government for a review of the decision, said Prime Minister Datuk Seri Najib Tun Razak.

Najib conveyed this to his counterpart Sheikh Hasina Wajed during their talks on the sidelines of the Common wealth Heads of Government Meeting (CHOGM) 2009 here on Saturday.

Speaking to Malaysian journalists at the end of Day Two of the conference, he said: “I explained to her that we decided on the freeze to prevent unscru pulous agents from exploiting the workers.”

He said many Bangladeshi workers had been duped by these agents into believing that they would get well-paying jobs in Malaysia.

Some of them, he said, had even sold their belongings including livestock to fund their journeys to Malaysia.

“This is the kind of deception that we want to prevent,” he noted.

According to Najib, the Bangladeshi side understood that in the current econo mic climate, it would be difficult for Malaysia to increase the number of workers from Bangladesh.

The Cabinet decided to freeze the intake of Bangladeshi workers in October 2007, the second time such a decision was made after the first in 1999.

In March this year, the Cabinet also cancelled visas for Bangladeshi nationals who obtained their work permits in 2007 but have yet to enter the country.

The move was taken in line with the government’s decision to minimise intake of foreign workers, except in certain critical sectors. — Bernama.

Are You Driving Your Boss Crazy? Eight Behaviours Bosses Dislike

By Robert Half International
In today's workplace, it goes without saying that it's a good idea to remain on the boss's good side. Your relationship with this person can be a major factor in not only your on-the-job happiness but also your career success. And your boss can be a powerful ally; having a manager who thinks highly of you may improve your job security since you'll have someone who is willing to defend your value to the firm should layoffs occur. So, the last thing you want to do is exhibit behaviors that undermine this relationship.
Unfortunately, your manager may not always tell you if your behavior is driving him or her nuts. Here are eight actions to avoid:
1. Turning down new assignments.
Your supervisor comes to you to say that you'd be the ideal person to mentor a new staff member. She wants to know if you have the time to take on this task. You do, but you're not interested in the responsibility, so you decline the offer. Bad move. It's unwise to build a reputation as someone your boss can't count on. Plus, it's a good rule of thumb to accommodate your boss's wishes, as long as you have room on your plate for the extra work. A pattern of "no's" can convince your manager to stop offering you opportunities, including ones you might be interested in.
2. Being "high-maintenance."
Do you require constant feedback or positive reinforcement to remain productive? Must you check in with your boss every hour to ensure you're on the right track? This constant need for attention may prevent your manager from attending to important tasks or getting into a good work flow, which is enough to drive even the most patient professional up the wall.
3. Communicating poorly.
You're working on a high-profile project and just left your supervisor a voice-mail message with a quick progress update. He calls back, asking to be e-mailed the information. And, given the importance of the assignment, more detail would be nice. It's critical you understand your boss's communication preferences and adjust your style accordingly to ensure the two of you remain on the same page. In addition to preferred mode of communication, consider how much -- or how little -- information your manager would like.
4. Asking too many questions.
Everyone knows the saying "In one ear and out the other." Don't embody it when interacting with your manager. Repeatedly asking the same question ("Whom should I follow up with again?") is a sure-fire way to annoy your supervisor. To avoid this situation, always listen carefully when your boss is speaking and try to seek clarification on new projects from the get-go. If you must follow up, be sure to approach your manager with a specific list of questions and take notes so you don't need to bother him or her again.
5. Failing to follow through.
You're rushing to finish a presentation for your boss. After reviewing it, he notes a few typographical errors that you should have caught. To build your manager's confidence, you must think ahead and pay attention to details. As you tackle a project, think about the types of concerns your boss is likely to have, questions he or she may ask, and stumbling blocks that could get in your way. For example, if you're in charge of organizing an important meeting, have you tested the necessary technical equipment ahead of time? Prepared and proofread any handouts? Made arrangements to arrive early so you can set up? Even when things are hectic, keeping a keen eye on every detail is necessary to impress your supervisor.
6. Refusing to admit your mistakes.
Creating an excuse to justify poor performance is dishonest and unprofessional. Plus, chances are your ploy won't stand the test of time. If you make a mistake, step up to the plate; then go further by devising a plan for both correcting and avoiding similar incidents in the future. For example, if you included the wrong subject line in a mass e-mail, set it up with a colleague to review any memos with large distribution lists before hitting Send. Employees who accept ownership demonstrate professionalism, maturity and confidence.
7. Waving the red flag after the ship has sunk.
Your manager has asked you to compile a complicated report by the end of the week. Friday afternoon, you realize you can't finish it in time and break the news to your boss. She's furious! If you had just let her know earlier, she would have been able to provide you with extra resources to complete the project by the deadline. The lesson here: Let your supervisor know as soon as you sense a problem growing. With advanced notice, your manager can often work with you to stave off disaster.
8. Fueling the rumor mill.
Above all, supervisors seek employees with a positive outlook, especially given all of the negative news about today's economy. Enthusiasm is contagious, and these individuals are able to influence the attitudes of others. You don't want to be the one at the water cooler who spreads gossip or complains.
at November 26, 2009 No comments: 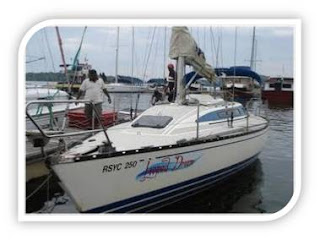 The crew was in good spirit and was eager to be back in the water.
The food & rest must have done the magic.
Even though we were unable to get to the start line on time, we continued to sail pass the bay and decided to enjoy the wind, the sun and the water.
At sunset, the entire crew gathered for the closing at Emerald Beach in Pangkor Laut for an evening of celebrating the National Day Racing Event.
Leopad Dream was towed to Lumut the following morning and the crew returned to K.L. by land.
at November 23, 2009 No comments: 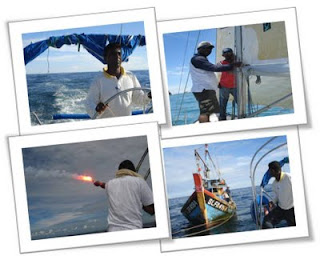 Though we completed the race at 1220 hours by crossing 4° 00.0 N, the crew struggled as the winds had died. The currents pushed us away and Leopad Dream drifted aimlessly.

With darkness arriving and one crew member down with sea sickness, Skipper Jega instructed a crew member to transmit distress signals. Hand held flares were used to attract the attention of fishing vessels.

At last at 1730, a fishing trawler responded to the ‘crew waving on board’ and Leopad Dream was towed to Pasir Bogak in Pangkor. The day offered an experience to reflect and learnings to apply. 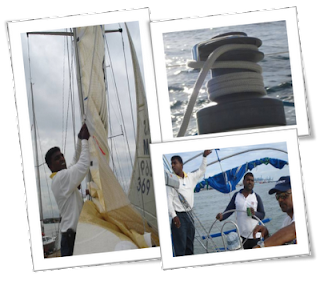 Source: Mr. Krishnan
The Crew: Mr. Jega, Mr. Chandru, Mr. Soman, Mr. Krishnan, Mr. Logan
At 1600 hours, the crew was all set, the main sail was up, the genoa was fitted and skipper Jega conducted a safety briefing on board the Leopad Dream. Off we left towards the vicinity of Buoy #14 (03° 03.30 N 101° 21.00 E).
The race officer John Ferguson gave the warning signal at 1755 then at 1800 hours all the sail boats were pointing northeast and soon we found ourselves out of the channel and in the open sea. Just before 1930 hours, as the sun began setting in the horizon, we noticed a storm.
It seemed like we were heading straight into it. Fortunately, as we approached the area, the storm vanished from our sight.As it got dark, the crews’ motion on board minimized as visibility decreased. It was smooth sailing all the way through the moonlit night. 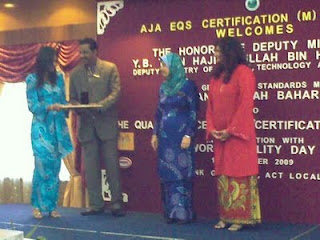 AJA Malaysia organized a Certificate Presentation in conjunction with World Quality Day last week. RM Leopad was invited to commemorate this event to not only to receive the Quality awards but also to show our endless support to promote & brand our national accreditation brand, ‘Standards Malaysia’.

The purpose of this event is to present the ISO Certificate to newly certified clients both in the public & corporate sector and to present certificate of appreciation to organizations for their continuous support. Apart from the certificate presentation AJA also took time to update the members on the latest development on the ISO and the key changes in the ISO 9001:2008.The prestigious event was braced by the Director General of Standards Malaysia, Pn. Fadilah Baharin.

RM Leopad was honored with two esteemed awards which is the Certification of Appreciation and Prestigious Quality Excellence Award Year 2009 for Organizational Excellence. RM Leopad attained the above two awards simply because we have demonstrated a significant improvement in our Quality Management System over the years. Additionally we have showed our continual support towards our accreditation body AJA EQS Malaysia & Standards Malaysia over the years. We have also been a portion of their achievements. This momentous event has marked another episode of our milestone achievement in the Quality Management System aspect of our organization. Certainly the efforts, spirit and determination of the staffs spearheaded by the dynamic leadership & guidance of the Board of Directors of Leopad Group, has contributed towards these proud achievements.
at November 21, 2009 No comments: 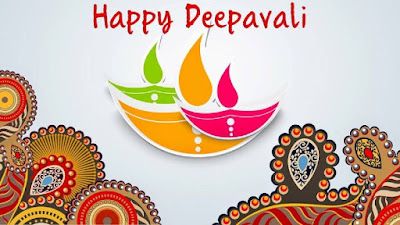 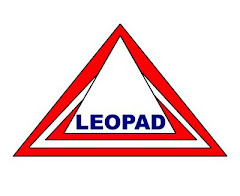